Hello everyone! I am back with a new review for you guys today! Happy release day to Jenn Bennett! Make sure to go pick up a copy of this book today because it was amazing and I highly recommend it! But, let’s get into the review :) 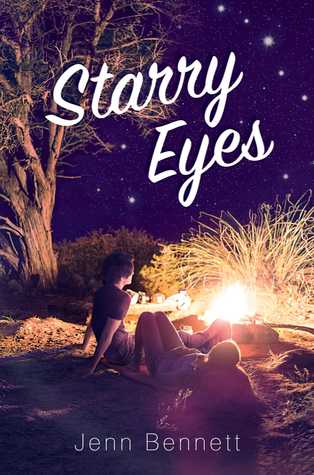 Goodreads Synopsis:
Ever since last year’s homecoming dance, best friends-turned-best enemies Zorie and Lennon have made an art of avoiding each other. It doesn’t hurt that their families are the modern day, Californian version of the Montagues and Capulets.

But when a group camping trip goes south, Zorie and Lennon find themselves stranded in the wilderness. Alone. Together.

What could go wrong?

With no one but each other for company, Zorie and Lennon have no choice but to hash out their issues via witty jabs and insults as they try to make their way to safety. But fighting each other while also fighting off the forces of nature makes getting out of the woods in one piece less and less likely.

And as the two travel deeper into Northern California’s rugged backcountry, secrets and hidden feelings surface. But can Zorie and Lennon’s rekindled connection survive out in the real world? Or was it just a result of the fresh forest air and the magic of the twinkling stars?

The first thing that I have to say about this book is that I love it! It was so well written and kept me interested the entire time. I really wanted to know how it was going to end and what was going to happen to the characters.

This book has so much going on but it was so amazing! I feel like there were a lot of small conflicts rather than one big one, but I loved how well they all connected to each other. It also features the friends-to-enemies-to-lovers trope, but it was done really well.

Zorie, the main character, was very oblivious/immature in the beginning which I did not really like, but by the middle of the book I think she really developed a lot. I fell in love with Zorie and Lennon, and I could not get enough of their relationship. It was so cute, and I could not wait to see where it went.

Lennon was such a great character. His personality towards the other characters was so funny because he is so sarcastic, but when it came to Zorie, he was compassionate, caring, and just so sweet.

I also really liked the setting of this book. I have gone camping quite a few times in the last year, so the struggles they had were struggles I could relate to. This made the story so much better for me. Also, I think that really added to the romance of it.

I think the synopsis does not do this book justice, because there is so much more to it than just the camping trip gone wrong aspect, but I don’t want to spoil anything.

Overall, the story was just both beautiful and heartbreaking, but the ending made my heart so happy and full.

I am definitely going to buy the finished copy of this book once I get a chance, and I can not wait to read the other Jenn Bennett book I own!